April 4, 2018 – By Joseph G. Allen
(See the original story with the New York Times)
Dr. Allen is an assistant professor at the Harvard T.H. Chan School of Public Health. 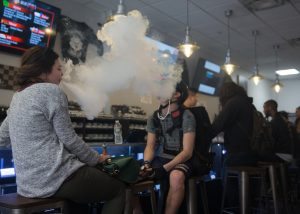 A vaping store and lounge in Manhattan.CreditMichael Appleton for The New York Times

Recently, there has been a shift away from calling e-cigarettes “e-cigs.” In public health circles, people now tend to call them by what they do: deliver nicotine to the inhaler. Thus, the term Electronic Nicotine Delivery Systems, ENDS for short, has come into vogue.

But I have a problem with that name. Nicotine isn’t the only thing e-cigs deliver; they also deliver formaldehyde, a carcinogen. It seems equally fair to call them Electronic Formaldehyde Delivery Systems.

Do manufacturers intentionally put formaldehyde in e-cigs? No, they don’t. But there’s some fundamental chemistry happening that can generate formaldehyde. E-cigs often use propylene glycol or glycerol to help transport nicotine and flavors and to create the big vapor cloud. We’ve known for a long time that when we heat these so-called carrier fluids they can transform into formaldehyde.

Sure enough, when we measure what’s coming out of an e-cigarette, we have found formaldehyde. Sometimes, a lot of it. A letter published in the New England Journal of Medicine caught widespread attention in 2015 when its authors reported that they had found emissions of formaldehyde from e-cigs. There was some initial push back from skeptics who claimed that the e-cig vaping conditions in the research used too high of a voltage (an actual user, they argued, would be deterred from puffing hard enough to generate the excessive formaldehyde because it would taste bad). Of note, one author of that critique receives funding from a group that has accepted money from tobacco companies, and another received money from an e-cig company.

It seems the hired guns were a bit quick to draw, so to speak. Study after study since then has confirmed that e-cigs can deliver formaldehyde to the user. My colleagues and I found, in a study published in the journal Environmental Science and Technology, that under typical conditions the formaldehyde coming out of an e-cig can even exceed what is known as ceiling limits — a level of formaldehyde in the air that is not allowed to be exceeded in the workplace, even for one second.

About a decade ago several former workers in a microwave popcorn packaging plant got sick with a severe and irreversible lung disease called obliterative bronchiolitis, which became known as Popcorn Lung. After a lengthy investigation, it was discovered that those who had most often been exposed to the popcorn’s fake butter flavoring were the most likely to have problems with their lungs. Diacetyl, the chemical that was used to create that fake butter flavor, was being heated up, and the workers were breathing in the vapors. Although diacetyl is safe to eat, it is not safe when it is heated and inhaled.

Heating and inhaling flavors sound a lot like what’s happening with e-cigs, right? And Diacetyl is used to create all sorts of flavors besides butter, like strawberry, piña colada and butterscotch. It’s not surprising, then, that we found diacetyl in over 75 percent of e-cigs tested.

Some e-cig makers have moved away from diacetyl because of its bad rap. But what are they using instead to create those 7,000 or so flavors of e-cigs on the market? Often we see a close look-alike chemical called 2,3-pentanedione, which we found in nearly 50 percent of e-cigs tested. And in animal studies, this chemical can cause something that looks just like Popcorn Lung.

To be sure, e-cigs may be a useful tool for smoking cessation for those who are addicted to traditional cigarettes. E-cigs are safer than cigarettes, no question. But “safer” does not mean “safe.” And all e-cig users need to be informed about the risks of inhaling these chemicals.

Furthermore, while supporters of e-cigs advocate for their smoking cessation benefits, e-cigs can also be a gateway to traditional cigarette use. Consider this: 22 percent of eighth-grade smokers used e-cigs first. That’s one in five — an astounding number of kids. The addictive nicotine in e-cigs is contributing to the next generation of traditional cigarette users. Will we then recommend that they use e-cigs to help them quit? This is the opposite of a virtuous cycle.

Although many states now restrict e-cig sales for those under 18, it’s clear that kids are finding ways to access e-cigs. And in my opinion, e-cigs are being marketed toward this age group. Who else is interested in puffing on an “Alien Blood”-flavored e-cig?

We have been warning workers about inhaling these chemicals for more than 10 years. (The Flavor and Extract Manufacturers Association of the United States suggests adding a warning about diacetyl and other flavoring chemicals that reads, “Handling of this flavor that results in inhalation of fumes, especially if the flavor is heated, may cause severe adverse health effects.”) E-cigs should be sold with similar warnings.

And if the public health community really thinks we need a new name for these devices, a more fair one would be “Electronic Nicotine/Formaldehyde/Diacetyl Delivery Systems” — though not even that would reflect the full list of harmful components. I suggest we stick with “e-cigs.”

Joseph G. Allen is an assistant professor at the Harvard T.H. Chan School of Public Health.