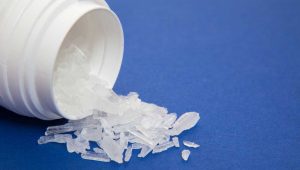 WV Birth Score’s most recent data show 14 babies out of every 100 born in the state are exposed to at least one substance during pregnancy.

The data, from October 2016 through August 2017, show 9 percent of those babies were exposed to substances, while the other 5 percent were exposed and diagnosed with neonatal abstinence syndrome (NAS).

“Several years ago, we participated in an umbilical cord study with several hospitals across the state,” Lindley said. “Even at that time, probably five to seven years ago, 17 percent were positive for some kind of drug use at Raleigh General — the highest in the state.”

He said he would estimate statistics at the Beckley hospital are similar today.

In addition to his work at AccessHealth and the hospital, Lindley works directly with pregnant women at a local treatment program called Turning Pointe at FMRS Health Systems in Beckley.

Turning Pointe, a 90-day residential treatment program, offers 16 beds and specialized services for women 18 and older who are pregnant or post-partum.

If necessary, Dr. Lindley can help women at the facility with a controlled taper off opiates to minimize the impact on their baby.

“Drug addiction is a lifestyle disease. You don’t just give insulin for diabetes and say, ‘Good luck.’ You also talk about healthy choices, diet and exercise. It’s your whole lifestyle,” Lindley said. “Drug addiction is the same. You have to talk: how do you deal with tough times, who are your friends, how do you celebrate the highs and lows of your life?”

He said medication-assisted treatment (MAT), such as methadone, with no other treatment, such as counseling, is a disservice to patients. He appreciates the Turning Pointe model, as the patient’s lifestyle is addressed. But 16 beds simply aren’t enough to address the problem.

“There are not enough options for pregnant women in the area.”

Lindley said most patients are open and honest about the substances they are using.

Some people believe pregnant women who use substances should be imprisoned, but Lindley said that’s not the answer.

“They won’t come in for prenatal care at all. This is not an incarceration problem; it’s a medical problem. It needs to be treated medically.”

With regular prenatal visits, a doctor can continue encouraging the patient to lead a healthier lifestyle.

“My father is a counseling psychologist,” Lindley shared. “I heard about drug and alcohol counseling at the dinner table.”

He said he learned from his father that a court-ordered patient doesn’t respond as well to treatment and therapy than a patient who voluntarily participates.

“I tell patients, ‘I’ll still see you and take care of you, but we’re not going to bargain.’ I continue to treat them as best as possible.”

Lindley emphasizes there are areas in life everyone can improve upon — healthier eating, smoking cessation, exercising more often, etc.

“The statistics on smoking — patients quit an average of six times before they stay quit. It’s a learning process. Just because you failed once doesn’t mean you should quit trying. It’s like riding a bike. The first time you tried, you didn’t just take off.”

Long term effects of in utero exposure to drugs is another one of the doctor’s concerns.

“Once that supply is cut off, all babies have some degree of withdrawal. For some it’s minor. But what’s the long term effect on these children who are exposed in utero on a developing brain?”

For the most part, Lindley said, “We have no clue. We really have no idea.”

Not enough research is available yet to answer definitively, but many local educators have shared statistics of increased behavioral issues in the school system since the increase of opioid abuse.

Lindley said it’s a nature versus nurture argument at this point. Drugs could have had an impact on the child’s development, but parents may also be more focused on their drug addiction than their child.

“We know we’re in a crisis,” he said. “It is increasing, and we need extraordinary energy, efforts and resources to tackle this crisis. Every child deserves a healthy start in life.”

Data is improving at health care facilities across the nation, especially after the passage of Jenkins’ NAS Healthy Babies Act, which was rolled into a package of bills called CARA (Comprehensive Addiction and Recovery Act).

“The numbers are still hard to come by,” Jenkins said. “I think what numbers we do have, while they are improving, are still underreported. We have a long way to go to get to a true, accurate count. But it is important that we continue to build that information.”

As the congressman says frequently, “You can only manage what you measure.”

Both Jenkins and Dr. Lindley are encouraged that there is more awareness of the problem, but they agree more resources are needed for pregnant women.

“More resources are being directed to pregnant women to support good prenatal care,” Jenkins said, “as well as education about the impact of the drugs, and the exposure, in utero, on the baby.”