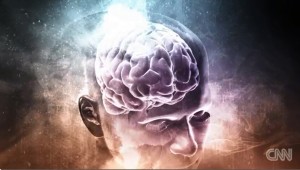 Huntington, West Virginia (CNN) — The high-pitched, inconsolable screams of babies born dependent on heroin and other opiates echo across the otherwise quiet facility.

The babies also shake, vomit and suffer from diarrhea. But it is their shrill screams that caretakers find so heart-wrenching.

“When they are born, because they’re no longer being exposed to an opiate, they’re going to go through withdrawal. That is what we deal with. We deal with babies going through withdrawal,” said Dr. Sean Loudin, the medical director of a neonatal therapeutic unit at Cabell Huntington Hospital and a separate facility called Lily’s Place.

“Thank you” diapers hang on the wall at Lily’s Place in Huntington, West Virgnia, where infants are treated for withdrawal.

Loudin first spoke to CNN in September after an outbreak of heroin overdoses in Huntington, West Virginia, an Appalachian town at the epicenter of America’s heroin addiction.

He has seen firsthand the tragic fallout of the nation’s opiate epidemic, with addicted women giving birth to babies going through withdrawal — known as neonatal abstinence syndrome — at skyrocketing rates.

New research released Monday underscores the problem. The research found that rates of neonatal abstinence syndrome have increased nearly fivefold across the country over the past decade.

From 2004 to 2013, the proportion of babies suffering withdrawal was especially pronounced in rural counties, increasing from 12.9% to 21.2%, according to research published in the journal JAMA Pediatrics.

“The most alarming thing to me was the growing disparity that we are seeing between rural and urban areas,” said Dr. Nicole Villapiano, the study’s lead researcher and a pediatrician from C.S. Mott Children’s Hospital at the University of Michigan.

Related Article: Heroin in America: The scarring of the next generation

The study included all neonatal and obstetric deliveries between 2004 and 2013 as compiled by the National Inpatient Sample database. Just 10 years ago, there were no differences between the rates of neonatal abstinence syndrome in rural and urban areas, but the new research, Villapiano noted, “saw that in rural areas, it was nearly a sevenfold increase over the last decade.”

“The diverging trend was the most striking thing we found.”

Babies going through withdrawal, she said, have difficulty sleeping and are irritable and uncomfortable. More serious side effects can include seizures and growth delays, according to Villapiano.

For rural hospitals, that can put a significant strain on already tight resources. Villapiano and her co-authors said the dramatic increase between rural and urban areas “highlights the urgent need of policymakers to appropriate funding for clinicians and programs that could improve access to opioid prevention and treatment services for rural women and children.”

“That in rural areas is where the real challenge lies,” Villapiano said.

In Huntington, Loudin is on the front lines. Though the latest research shows that 7.5 per 1,000 babies born in rural areas nationwide suffer from withdrawal, Loudin is seeing nearly 13 times that rate, with about one out of every 10 children born dependent on heroin or some other opiate.

“What this trend tells us is the country faces an addiction crisis. Many Americans face hopelessness, despair, economic hardship and very little appropriate coping mechanisms to deal with that,” he said of Monday’s research. “We need to focus on helping Americans deal with their problems of addiction. If we can help the adults who face the disease of addiction, then that will eventually trickle down and reduce the number of babies born exposed to drugs.”

How to get help

Struggling with addiction or know someone who is? Here are several organizations that help addicts beat back their habits and regain their lives.

Loudin said lawmakers did an extremely good job of shutting down the pill mills that fed the nation’s prescription opiate abuse, but since that supply was cut off in recent years, “there’s been a seemingly endless supply of heroin.”

“I’ve talked with parents who literally have to use heroin because they can’t get anything else,” Loudin said. “They have no other place to turn except to heroin. And that is a scary thing to think about — that just to avoid withdrawal and getting sick, they go out and buy heroin and inject it into their bodies just to function through the day.

“That is a dramatic story, and it is scary to me and shows the unfortunate and desperate circumstances that many Americans face.”